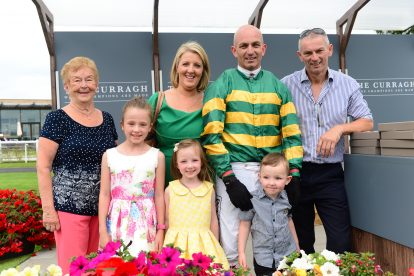 A million dreams come true for Graham Atkinson at The Curragh

Irish Injured Jockeys’ Corinthian Challenge is a three-race series for the popular racing charity. The first leg of this annual major fundraising initiative took place at The Curragh on Sunday. Racegoers enjoyed an exciting result when Cork man Graham Atkinson got up on the line to win on Air Supremacy for trainer Joseph O’Brien in the colours of JP McManus. 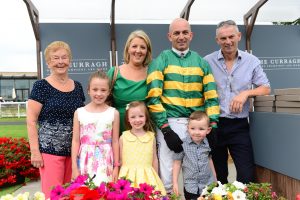 An emotional Atkinson said “I’m speechless, for twenty almost thirty years I’ve been in this game and it’s the first time I’ve ever crossed the line in front, I just can’t believe it! Riding in the famous McManus colours for a trainer like Joseph (O’Brien) – you couldn’t write this script, it’s a million dreams come true, I’ll bring this to the grave with me!”

Graham is a landscaper from Upton, Co. Cork who has grown up in racing, his brother Don Atkinson recently retired from point-to-point riding following four decades in the saddle and his cousin Wayne Lordan is one of Ireland’s top flat jockeys also. Graham celebrated with his wife Theresa, children Lucy and Charlie, his mother Eileen and extended family and friends who made the trip from Cork to support him.

This is the third year of the successful fundraising initiative which has already raised over €250,000 for Irish Injured Jockeys. The following two races will take place at Navan on September 23rd and Leopardstown on October 27th and a points system will run throughout the entire series to decide on the overall winner of the challenge for 2018.

Ruby Walsh, Chairman of Irish Injured Jockeys was quick to thank the industry for supporting the fundraiser so strongly “The Corinthian Challenge is a wonderful fundraiser but without the backing of the trainers and the owners within the industry it could not happen and you have all these riders working hard on their fitness for racing and raising a great deal of money for the charity too, it is hugely appreciated.”

Those taking part in the challenge are amateurs from all walks of life who have made a huge commitment signing up to take part in the series not to mention the rigorous training regime that has been in place for months to get race fit for today’s race. For further details about these individual heroes and to support their fundraising campaigns visit www.corinthianchallenge.com or text JOCKEY to 51777.