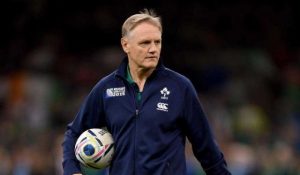 Three horse racing charities, Irish Injured Jockeys, the Irish Horse Welfare Trust and the Drogheda Memorial Fund and have come together to host ‘An Audience with Joe Schmidt’ on Thursday January 17 at 1pm in the Keadeen Hotel in Newbridge, County Kildare.

Irish rugby’s record-breaking head coach will discuss his love of horse racing, his involvement in racehorse ownership, his early days as a basketball coach, his life changing decision to move his family from New Zealand to Ireland, and his transition to one of rugby’s greatest ever coaches.

With Ireland pushing New Zealand all the way in the world rankings, 2019 is shaping up to be a huge year for Irish rugby. Joe will chat to Hugh Cahill, RTÉ’s rugby commentator, about Ireland’s chances at the upcoming Six Nations Championship, the 2019 Rugby World Cup in Japan, his decision to step down as coach of the Irish rugby team next year and his plans for the future. Guests will get the chance to ask Joe questions in a Q&A session afterwards.

The event will also feature a charity auction which will include an array of racing and sporting items and memorabilia, concert tickets, art, luxury hotel stays, rounds of golf with sporting stars and VIP day at the races.

Tables of 10, which include lunch, are now available for €1000. Please contact Donal O’Shea from the Drogheda Memorial Fund on 045 445 620 or by email: donal.oshea@ihrb.ie